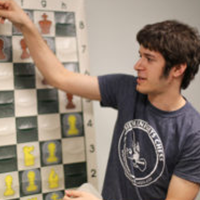 Jeremy was crowned the Wisconsin State Championship three times between 2006 and 2009. His biggest victory was winning the 2009 US G/60 Championship, organized by Chicago Blaze owner, Sevan Muradian. In 2009, Jeremy played as an alternate for the Chicago Blaze. In 2010, he wrote the Blaze Game of the Week Column for the team website. After captaining the University of Chicago chess team for four years, Jeremy took a chess teaching job in the DC area, where he has managed hundreds of chess clubs and camps with the company Silver Knights Enrichment. His USCF rating is currently 2375.